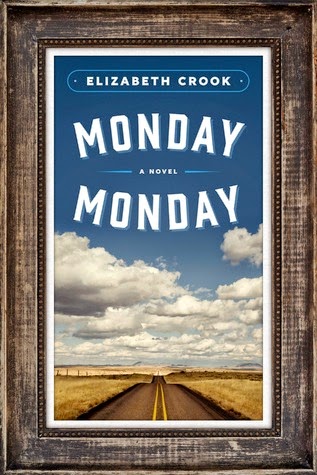 I was recently sent a copy of Monday, Monday by Elizabeth Crook from the nice folks at FSB, and immediately dove into this fiction-novel-based-on-a-real-event!

In August, 1966, Charles Whitman, a student at the University of Texas, climbed into the clock tower and began shooting students in the largest campus killing until Virginia Tech. Sixteen students were killed and thirty-two wounded - among them, Shelly, a girl simply crossing the plaza. She is saved by Jack and Wyatt, two cousins who risk their own lives to drag her to safety.

From there, their three lives begin to intersect and collide over the next forty years. There's a love affair, a baby, a blending of families, lies, betrayal and ultimately redemption.

I was absolutely drawn into the first part of the book - the actual shooting - and was on the edge of my seat with tension. The love affair was encompassing and affecting and kept me reading, and seeing the characters pulled apart and then put back together was engrossing and interesting. I did find it a bit jarring the way Crook would summarize years and years of character development in a page or two, but understood that she wanted to cover a longer time period in the novel.

For me, though, the ending felt unresolved or rushed or something - there was a dog taking up way too much "air time" with absolutely no purpose or reason, a sand storm that didn't do anything to add to the novel, and everything just hustled up to the ending. After such a strong start, I wanted a stronger ending.

Overall, though, this is an easy novel to get pulled into, and I was definitely flying through the pages to get to the ending I envisioned for the characters! A solid, solid novel - so interesting!

This novel will be released April 29th.
Scribbled by Marissa
Email ThisBlogThis!Share to TwitterShare to FacebookShare to Pinterest